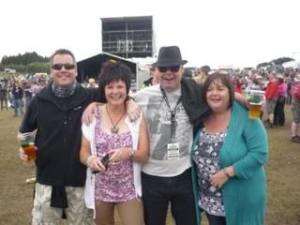 Being born into a large family, music was always going to play a pivotal role in my upbringing through exposure to my sisters Elvis Pressley records and my brothers incessant cassettes of Slade or the vinyl LP covers of Top of the Pop’s compilations. My own tastes developed through the glam years of the Sweet and Alice Cooper before dabbling in Punk and moving through a myriad of changing sounds during the 80’s and 90’s.

Like many compatriots my musical journey took an unexpected turn in 1982 when I went to watch U2 in Glasgow (promoting the ‘War’ album.) The Alarm provided the support and I vividly recall the energy and enthusiasm of both the band and the crowd, specifically recalling the first time I had witnessed a support band earn an encore!

Before that gig I had heard the iconic ’68 Guns’ and recognised another couple of tracks but hadn’t previously bought into the passion or the power of the group, particularly the enigmatic frontman Mike Peters. I recall buying ‘Declaration’ soon after, an album that remains in my all-time list of favourites.

Around the same time my young brother Stephen (Stevie) bought a copy of ‘The Crossing’ by Big Country, a band that would go on to provide the soundscape to his adult life. Stevie was four years younger than me and although our career paths took us on different roads we remained close and where my musical tastes developed with Marillion getting well and truly under my skin, he remained firmly entrenched in the Big Country camp but dabbled in various other 90’s bands before stumbling upon the likes of Rod Stewart and Springsteen and the extravaganza and experiences of outdoor stadium gigs. Stevie was also a regular at the local Wickerman festival and had the pleasure of witnessing the Alarm play a storming headline slot in 2006.

Stevie continued to follow Big Country buying everything they released, never missing a tour and I recall his devastated angst when Stuart Adamson died. He was delighted when the band reformed with Mike Peters and took a great interest as the line-up evolved and we both went to see them play their spiritual home of Dunfermline in 2012.

The same year I was due to turn 50 and had been looking for some milestone markers of events and at the Fife gig my attention turned to the forthcoming Ben Nevis ‘rocks’ event. In the build-up to ‘Restless Natives’ Mike appealed to the crowd to join him “at the highest gig in Britain to take the fight against Cancer to new heights!” His words resonated and struck a chord and there was no way I was going to miss out on such an opportunity even if I’d never climbed a hill in over 25 years!

I had been aware of Mike’s on-going battle with Cancer through press coverage and had previously bought a copy of “The Road to Recovery” DVD and was humbled by his resilience, tenacity and passion. Unfortunately Cancer had recently visited my own family taking my wonderful mother-in-law in 2009. In addition, my brother in law Tom had been fighting his own personal battle for a number of years and these experiences hardened my resolve to help raise awareness of the Love Hope Strength foundation.

My training started gently with some local climbs before discovering the Moffat Hill range. Apart from improving my fitness I found I was enjoying the walking (but not as much as Barney our Cocker Spaniel!) The experience also opened up my realisation of what a beautiful part of Scotland I lived in. I had maybe taken the south-western countryside for granted previously but that changed as I saw the landscape transform with the seasons as my walks became longer.

In the lead up to Nevis I had been working in a temporary post at a local factory in Lockerbie with a brilliant group of people. The team got behind my fundraising and we arranged profitable bring and buy sales of second-hand CD’s and DVD’s. I even underwent a charity leg-wax the results of which can be seen via;
http://www.youtube.com/watch?v=XcypTxT62ws

The most disturbing part of this was being sponsored £50 to wear a Rangers top – as a Celtic season ticket holder I’m not sure what hurt the most and still shiver at the thought!

The weekend of Nevis Rocks was a blast from start to finish. The first highlight for me was the journey to Fort William driving through the stunning scenery of Loch Lomond and Glencoe. An acoustic gig was held the night before the walk hosted by Mike Peters and an entourage that included members of BC, the Alarm and Simple Minds. At the conclusion of the gig there was a moving candlelit interlude in the grounds of the nearby Inverlochy Castle before we departed to try and get some sleep before a 4am rise the following morning.

The walk up Nevis was a terrific and eye-opening experience with some amazing scenic views. There were also parts when it rained and places where it was so misty you could hardly see 10 yards in front of you but I wouldn’t have missed it for anything. I also met some amazingly warm people (including the inspirational Lydia Franklin) who were all taking part for specific and personal reasons.

At the summit Mike performed the highest gig in Britain and I was blown away by his acoustic versions of “In a Big Country” and “High on the Hill” amongst others. Despite the cold the gig passed all too quickly before it was time to walk back down into Fort William and head home tired, emotional but on a huge high. It was great to see some footage from the peak which was later posted on YouTube; I had unsuccessfully tried to record some of the gig and was delighted somebody had managed to do it correctly.

The following Christmas my wife bought me a dedication gift from the Alarm website comprising of a unique recording and message from Mike with a version of “High on the Hill.” There was also a handwritten and signed page of lyrics of “Walk Forever by My Side” a truly wonderful present and a superb memento of easily the best experience I had last year. Delighted with the dedication I sent an e-mail of thanks to the Alarm in January and was amazed when I received a reply from Jules Peters acknowledging the feedback, a simple but appreciated act.

Early in 2013 I pre-ordered copies of the long awaited Big Country CD “The Journey” and bought tickets for Stephen and me to go and see them play in Glasgow for his birthday.

Stephen had been excited about the release of “The Journey” and had been looking forward to the gig but in the lead-up to it he had been feeling unwell and eventually pulled out because he had been feeling so poorly. His decision not to attend pressed some alarm bells with us as he had never missed a tour previously and this was the first sign that things weren’t right with him but it was only after much cajoling that we were able to get him to visit his Doctor.

I eventually went to the Glasgow gig with my best mate, I recall phoning Stevie during the gig to let him hear the incredible live sounds of the new album. I had also previously offered to help with the LHS team swabbing volunteers keen to ‘get on the list’ before and after the gig and we were all blown away when 71 heroes stepped forward to be signed up, showing support to the LHS cause.

Afterwards Mike and other members of the band came into the area where we were, I approached him a bit reluctantly and asked him to sign my dedication disc which he did without question. It was only after I had driven home and looked at the disc I noticed that he had signed it “To Mickey – RESPECT” a small but brilliantly appreciated gesture.

Stephen’s health meanwhile had rapidly deteriorated and after various tests it was confirmed that he had developed Mesothelioma, a Cancer which occurs in the lining of the lung. From the outset his diagnosis was terminal with only a short palliative care plan an option and we learned that he had developed the Cancer from exposure to asbestos.

Stephen was desperate to remain at home and dreaded hospital but thanks to a brilliant team effort his last wishes were met and a care plan put into place that allowed him to spend his last few days at home. Visitors popping in to see him noticed that he had been wearing a Love Hope Strength silicone band, a last gesture to Mike and his role with Big Country.

Sadly Stephen died during the early hours of 28 May, six weeks after first attending his GP but got his last wish of having family members around him and Big Country CD’s playing in the background at the end.

After the initial shock, discussions took place about the funeral arrangements with a decision being made to hold a retiring collection on behalf of LHS. A request was made to see if additional wristbands could be obtained for family members to wear at the service. I sent off an urgent e-mail and almost immediately received a response from Jules who was with Mike and Big Country on tour in Germany.

Mike and Jules were completely supportive of our request and promised to send a number of bands to me when they returned home to Wales a few days later. Mike also volunteered to record and dedicate a specific version of “In a Big Country” in Stevie’s memory, an offer which left me quite speechless.
Despite a really heavy schedule Jules and Mike went out of their way to get the wristbands and download to us and with the kind permission of the Church the track was played at the end of the funeral as Stephen took his last journey.

We were all absolutely blown away by this gesture – neither Mike (nor Jules) had ever met Stephen but the sincere devotion and tenacity in carrying out this symbolic act was both amazing and touching. I can’t even begin to comprehend what Stephen would have made of it all!
Before Stephen took unwell I had already signed up to participate in Nevis Rocks ’13 along with my two youngest boys Robbie and Rory. Taking a page out of the Lydia Franklin book of adventures I had also elected to cycle from my home near Lockerbie to Fort William (about 250 miles) to join in.

As Stephens health deteriorated my sister Fiona also signed up before nieces Karen and Natalie and their husbands Gary and Donald volunteered to come along too, along with my remaining son Danny. Three other members of the family are coming along to lend support and irrespective of the pain or the struggle, every turn of the pedals and every step of the Ben will be taken in memory of Stephen and any donations to our fundraising adventure can be made via;
http://www.justgiving.com/Mickey-Collins
It’s difficult putting all of my thoughts and memories into this account and I never imagined the circumstances would have taken the route that they did. Stephen has gone but his memory will live long with us. The last few months have been difficult and challenging but the support and dedication of Mike and Jules Peters, Love Hope Strength and the entire Alarm and Big Country families has been awesome, touching and greatly appreciated not just by me but my whole family.