Mike Peters and The Alarm delivered an electrifying weekend of music at The Gathering 22 which was sold out to capacity (1300) and celebrating a return to LLandudno after a four year hiatus in Prestatyn. Photos are now available for The Gathering 22

Fans came from all over the world, some travelling from as far away as Kuala Lumpur, South America, USA, Australia, Scandinavia, Holland, France, Italy, Germany and all parts of Britain to take part in the annual weekend celebration of all things Mike Peters and The Alarm. 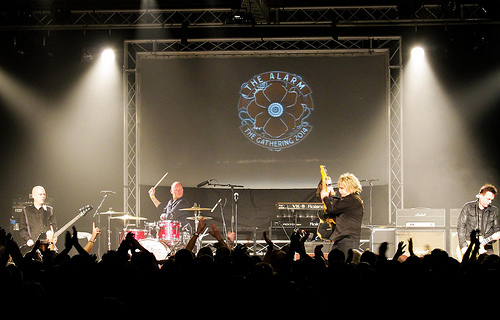 The Gathering began early on Friday night and featured a 2:45 hour set by Mike Peters that began with a debut of the soon to be released ‘Declaration 2014′ album. Mike Peters was joined by world class drummer and multi-instrumentalist Smiley (who has played with both Robbie Williams and Joe Strummer), and the two took the sound of The Alarm back to its original folk acoustic punk roots with a banging set of early Alarm classics that had the audience enraptured by the new modern vintage sound that left fans filled with excitement about the prospects for the new release and upcoming ‘Declaration Tour’ which is on the verge of being a complete sell out.

For the finale the two were augmented by the full Alarm 5 piece line up, James Stevenson (The Cult), Craig Adams (The Mission), and Mark Taylor (Simple Minds), for a closing ‘Sixty Eight Guns’, performed for the 21st Century in a style that no one anticipated. It was like the White Stripes, Bob Dylan and The Clash all thrown into one stupendous mix called The Alarm 2014. There was still more to come as Mike Peters made an emotional dedication to the doctors and nurses of the Alaw Unit, Ysbyty Gwynedd and the North Wales Cancer Treatment Centre in Glan Clwyd hospital and principally Dr. David Edwards. Dr. Edwards who is the Haematologist responsible for keeping Mike Peters alive through 18 years since he was first diagnosed with Non Hodgkins Lymphoma and again with Leukaemia in 2005. As a show of appreciation Mike invited Dr. Edwards on to the stage where he was presented with a cheque for £40,000 to help with improvements to the cancer facilities in North Wales. All the funds were donated and raised through the Love Hope Strength Foundation UK (formed by Mike Peters and his wife Jules in 2007) as the catalyst for the annual Snowdon Rocks event which is populated by local supporters and Alarm fans who follow Mike to the top for an acoustic concert on the summit once a year.

The evening finished with a mass sing-a-long of the charity’s theme song ‘Love Hope and Strength’.

The energy of the Friday spilled into the Saturday morning where Mike Peters treated the fans to a Masterclass on how to play the song ‘Marching On’ from the original ‘Declaration’ album which was released 30 years ago on February 13th 1984. A lot of fans had brought guitars with them in the hope that they would get to play with their hero in the way Mike had played with Bruce Springsteen in New Jersey the week before and they were not disappointed as Mike invited them all up on to the stage to perform an impromptu version with guitars held high in the air in true Alarm style. 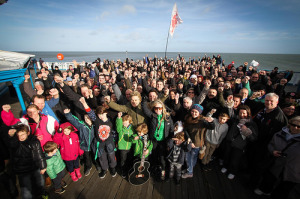 Mike Peters also made an announcement about the Love Hope Strength next international fund raising initiative to the Holy Land to support an under-funded Arab bone marrow donor registry that is dedicated to saving lives all across the Middle East. The Hadassah Arab registry is spearheaded by a lone woman named Dr. Amal Bishara who has managed to build bridges to peace in the region by inspiring people to overcome their fear and sign up to become potential life saving donors. The Hadassah registry is a non political organisation that takes in cancer patients for all countries in the Middle East.

Mike was also able to break the news that the Love Hope Strength UK ‘Get On The List’ campaign, which can successfully sign people on to the registry up the increased age of 55, has found its first lifesaving match, with an as yet unnamed person (who signed up in late 2013), already in London being prepared to help save a persons life. Mike took the opportunity to thank local MP’s Chris Ruane (Denbighshire), and Mark Tami (Deeside), for their support in helping make this change to the age restrictions a reality for the UK. In America the Love Hope Strength Foundation, which has been signing up people from 18-55 for that last few years has registered over 58,000 people and found 827 potentially life saving matches.

The Saturday night was no less emotional as Mike Peters led the Alarm and the fans on a 4 hour 5 minute rock and roll roller coaster ride go high drama, intensity, humour and inspiration. There were so many highlights; Mike Peters even had the audacity to begin with ‘Sixty Eight Guns’ proving that the catalogue of this singer-songwriting-guitarist-frontman is as strong as any artist currently performing in the 21st Century. The evening was divided into 2 halves and the first set closed with a version of the evergreen ‘Where Were You Hiding When The Storm Broke?’ which culminated in an explosion of playing cards that filled the room from floor to ceiling as the fans came together with the band as one. 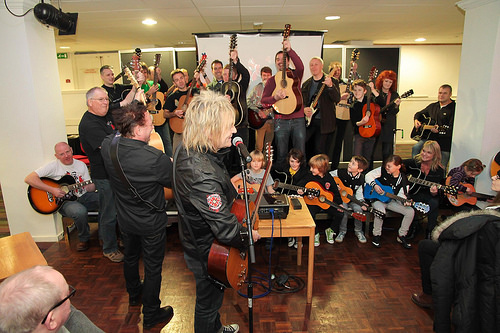 After a 15 minute break (during which water was handed out to members of the audience to preserve their stamina for the closing stages), the band roared back on to the stage and showered the event with a greatest hits package of Alarm classics. Mike and the band took a moment to sit down at the front of the stage and perform an intimate acoustic set which was enhanced by keyboard player Mark Taylor’s accordion playing and guest Juilan Jackson on violin.

It was refreshing to see the band and the audience sharing some great humoured banter that reflects the long standing nature of the unique rock and roll relationship. It wasn’t long before the band and the entire audience were back on its feet again, rocking as if their lives depended on it which was quite literally true for the next guest Dave Spragg. Dave is an Alarm fan going through the fight of his life after being recently diagnosed with bowel and liver cancer. Dave Spragg was invited to join the band on stage after writing a highly personal account of his struggle on the Alarm’s social media pages. It’s this sort of human touch that makes Mike Peters and the Alarm so respected and beloved in the rock and roll community at large. The fans all knew the significance of this remarkable gesture and the venue literally shook with emotion, there wasn’t a dry eye in sight.

From one emotional high to another it just kept coming and during ‘One Guitar’ Mike Peters invited his own children Dylan and Evan to join him onstage with a host of children from Ysgol Dewi Sant in Rhyl. The future of rock and roll was there for all to see and hear in this most touching of moments. The anthemic ’45 RPM / ‘Free Rock and Roll’ burst from the speakers sounding so fresh and powerful amplified by the fact that both songs are the inspiration behind the ‘Vinyl’ movie which was shot in North Wales to critical acclaim and is currently premiering on British Satellite TV. 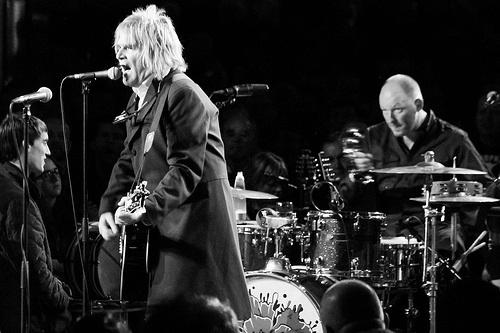 The last song of the night was ‘Blaze Of Glory’ and every single person singing knew that they had just witnessed something special. Mike and The Alarm had been on stage for over four hours but the time had flown and it was hard to believe what had just taken place. A one off – yes! A legend – a certainty and that was still not the end.

At 11 o’clock on Sunday morning it seemed like the entire Gathering community spilled out on to the promenade of Llandudno and at the end of the Victorian pier an outdoor concert broke out with Mike Peters singing solo under the North Wales sunshine, singing his heart out once again and reaffirming in all of us who took part in this incredible weekend, the power of rock and roll and now through the Love Hope Strength of Mike Peters and his audience, it now has a new mission to ‘save lives one concert at a time’.

The Mike Peters and The Alarm Declaration 2014 album is released from February 13th and the World Tour that follows, begins on February 14th at Liverpool O2 Academy.

To find out how you can become involved in Snowdon Rocks, Ben Nevis Rocks and the Holy Land Rocks please visit www.lovehopestrength.co.uk