VAIL — Vail Rocks, backed by the Love Hope Strength Foundation, uses a Get on the List campaign to turn concerts into life-saving events.

It’s rare that people get to witness where their money goes when they donate to charity, and it’s exceedingly rare that total strangers get the opportunity to save someone’s life. But that’s just what can happen at Vail Rocks, where you can get on the national registry with Delete Blood Cancer (Delete Blood Cancer DKMS is the largest bone marrow donor center in the world) by just doing a simple cheek swab.

Taking place today and Saturday, the event combines hiking Vail mountain with acoustic performances by a handful of participating musicians, all to raise money for cancer. 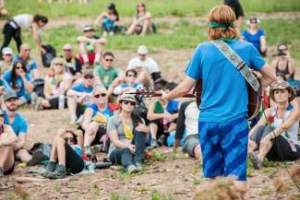 Mike Peters, musician and lead singer of both Big Country and The Alarm, is a two-time leukemia survivor from Wales who started the foundation. Now Love Hope Strength is headquartered in Denver, with chapters in Dallas, Peru, the United Kingdom and Australia. The foundation has performed concerts on six continents, including remote venues such as the base camp of Mt. Everest, the top of the Empire State Building, the Incan ruins of Machu Picchu and the glaciers of Mount Kilimanjaro.

“The mountains are the equalizer; no matter what we all make it the top the same way,” said Shannon Foley Henn, the Love Hope Strength foundation’s executive director.

This weekend is the second annual Vail Rocks.

“When we brought the idea to Vail, they immediately worked together to build this into a flagship event for Love Hope Strength,” said Foley Henn. “This year we have hundreds of hikers coming in from all over the world. (From) as far as Australia.”

Tonight a welcome reception takes place at The Sebastian in Vail with Trista and Ryan Sutter. On Saturday, registered hikers will check in starting at 7 a.m. at the base of Gondola One in Vail Village. For $100, hikers get a shirt, water and lunch on the trail. The hike begins at 8 a.m. with the first acoustic performance, and it will continue to be broken up with performances along the way. All in all, the hike should take about four hours to complete.

“It’s hiking, taking a seat and listening to some jams; everyone catches up with each other,” said Foley Henn. “There’s high emotion on the trail. People are meeting each other and everyone’s got a story to tell.”

At 5 p.m., following the hike, a concert will take place at Solaris in Vail Village. All the musicians from the hike will take the stage along with the kids from Denver’s School of Rock. The concert is free and there will be food and drinks available for purchase, with all proceeds benefiting Love Hope Strength.

By registering for the hike, people are supporting the Love Hope Strength Foundation financially. With the money raised, the foundation works to give it back to the community where the hike was held. At Love Hope Strength Foundation events, there’s free registration to become a bone marrow donor. The campaign has added 35,000 people to the national marrow database, which has resulted in more than 500 potential life-saving matches for patients in need of transplants. The cost for the cheek swab test is usually $65 because of the lab fee, but at the Love Hope Strength events it’s free.

From last years Vail Rocks, four people found out they were matches and went on to save lives.

One of those matches, a man named Malcolm Williams, stumbled upon the registration booth at least year’s Vail Rocks while visiting from Denver with his wife. Although they were on a different hike, they shared a gondola ride with a couple that had just completed the Vail Rocks trek, and they learned about the Love Hope Strength Foundation and decided to join the post-hike festivities.

“Walking around, I saw a booth set up where they were swabbing cheeks,” Williams said. “I sat down, did it and registered.”

In February, he received a call about being a potential match; the recipient was a 28-year-old French woman.

After a few months of analyzing his blood samples to make sure he was still a positive match, Williams was flown to Washington D.C. for a physical and the donation was finalized.

“The best part that helps you, considering there’s time invested in the donation process, is that you think a lot about what the recipient is going through. It makes you want to do it,” Williams said.