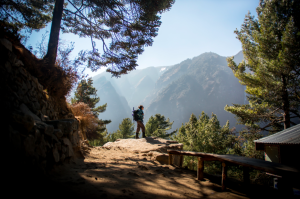 Remember the documentary Everest Rocks, which ran on the cable music channel Palladia and showed impromptu singalongs by members from 1980s bands such as Squeeze, The Fixx, The Alarm and The Stray Cats as they climbed peaks in Nepal for charity? That film captured the world’s highest concert performance ever, and kickstarted the cancer-fighting charity Love Hope Strength (LHS).

Right now through December 12, 2012 the rockers are at it again — this time at Everest Rocks II with Brett Dennen, G. Love, Cy Curnin and members of the Gin Blossoms and Fastball — and you can follow their journey, message the team with song requests and encourage them on their way to the Everest base camp, where they’ll break their previous world record for highest concert at a 12/12/12 finale gig.

LHS, which has held hundreds of events, climbs and concerts over the past five years to raise money and awareness for cancer treatment and bone marrow donor matches, was formed by cancer survivors Mike Peters (frontman for The Alarm) and James Chippendale (an entertainment entrepreneur) as a hip alternative to the standard charity gala. Today, the organization is the world’s largest rock ‘n’ roll cancer charity, and receives the support and participation of thousands of musicians, doctors and fans.

Shannon Foley Henn, executive director of LHS, says the idea of rockers climbing mountains inspired her to honor her brother Ryan, a cancer survivor, by joining the team. The physical demands of climbing mountains were nothing compared to what her loved one had overcome. “If [The Stray Cats’] Slim Jim Phantom can do it, then so can I,” she laughs.

Rather than pool money to send to larger research funds, Henn says the LHS approach focuses primarily on a handful of partners and specific needs of cancer treatment resource providers in the areas around the climbs. For example, during the current trip to Nepal, the team plans to help a local cancer center there replace faulty mammography equipment. In Tanzania, where the team climbed Mt. Kilimanjaro in 2009, LHS built the country’s first children’s cancer wards at Muhimbili National Hospital in 2011. The organization has also boosted the “Get On the List” campaign for bone marrow donors by holding registrations at concerts, including the popular “Vail Rocks,” which is returning to Colorado in June 2013.

At the heart of the organization is the music and spirit of Peters. He’s not participating in the current Everest climb (he’s doing double duty on tour, and as the current lead singer of Big Country after the death of original leader Stuart Adamson in 2001), but his lyrics and defiant optimism as demonstrated through the albums and live shows of The Alarm helped him survive leukemia and provide strength to others fighting their own battles.

Of the LHS mission to “save lives one concert at a time and fight cancer globally,” co-founder Chippendale, who beat leukemia in 2008, says. “Music is the one common thread we have.”
For more information about the organization and Everest Rocks II, visit Love, Hope, Strength Foundation.